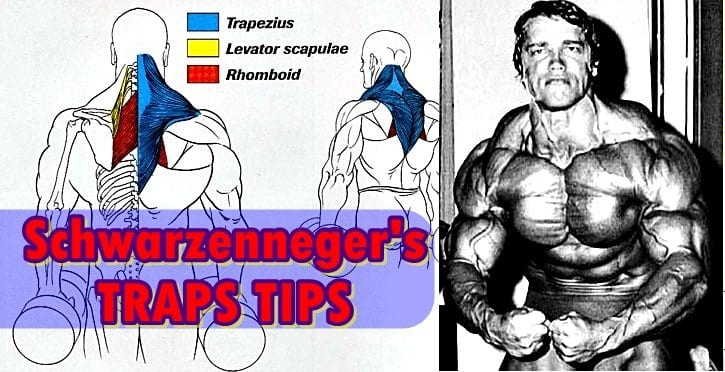 Even if everybody knows and thinks that if you want bigger traps you need to shrug more, there is more to build the trapezius muscles than just shrugging.

Here’s what Arnold Schwarzenneger has to tell us about the traps: Throughout my bodybuilding years I got a lot of questions about how to train this important muscle group, such as: Should I train them with back or shoulders? How many sets and reps should I do for traps? How often should I train them? Allow me to answer all these questions, and more:

There are actually three different trapezius muscles: the upper traps (which is what I’m focusing on here), the middle traps and the lower traps. I’ve always considered the upper traps a shoulder muscle, simply because they’re right on top of the shoulders and you can see them from all frontal views. They also assist the delts in many exercises, and that’s why I’ve always been in favor of training traps on shoulder day.

Since I thought of the traps as another shoulder muscle, I trained them with the exact same frequency as delts. So I would suggest that if you train delts twice a week, train traps the same. As for how many sets to do, I always treated traps as a smaller bodypart, similar to forearms. For example, if I trained my delts with 20 sets, I’d typically do 10-12 sets of isolated trap exercises immediately after that. (I always trained delts first because the traps assist them, and if you trained traps first, you’d be weaker on your shoulder exercises.)

In regard to how many reps to perform, a lot of lifters believe traps should be trained with slightly higher reps, but I always stuck to 8-12 reps.

Most trainees think the only way to isolate their traps is with different variations of shrugs. That’s partly true–the majority of your upper-trap training should consist of shrugs, but most people do only one or two versions. For well-developed traps, you need variety. Barbell shrugs can be done both in front of and behind you; dumbbell shrugs can be performed standing, seated and facedown on an incline bench; and even cable shrugs should be in your arsenal. There are other creative ways to hit the traps. One of them is to go past parallel on lateral and front raises, bringing the dumbbells overhead so the top of the range of motion involves the traps much more. On upright rows, a closer-than-shoulder-width grip helps involve the traps more, as it brings the elbows higher at the top.

Trust me, do these and your traps will be stiff and sore the next day–and you’ll know firsthand that great traps come from more than just a shrug or two.

* Pull the bar (in the first exercise) or raise the dumbbells (in the latter move) past the point where your upper arms are parallel to the floor; alternate which exercise you use every other workout.

There you have it! The king has spoken. Read all the above article written by Arnold for flexonline, and you will see a very good improvement of your trapezius muscles. After all, who could be more right then the Golden Era King himself? 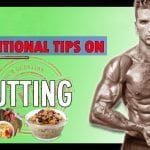 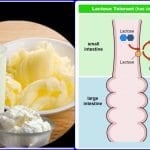