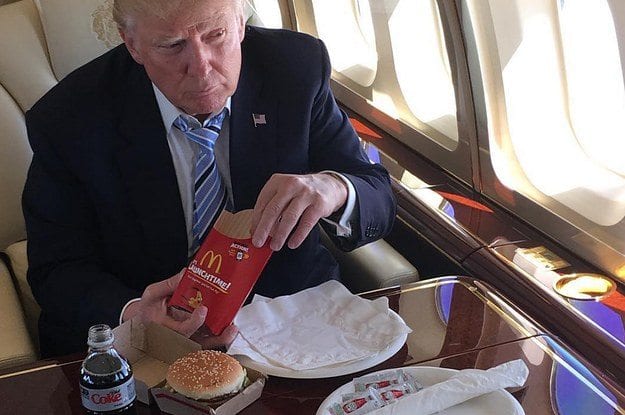 Donald Trump wants America to know he loves fast food like America loves fast food.
Over the years, Mr. Trump has broadcast his culinary preferences to the nation on Facebook, Instagram and Twitter posts, devouring a bucket of Kentucky Fried, feasting on a McDonald’s burger and chowing down on a taco bowl.

Donald Trump’s diet is very unhealthy. His a junk food aficionado. He eats fast food several times a week. The fish filet is his favorite. Trump also likes Big Macs. He even did a commercial for McDonalds in 2002. He also seems to like KFC and steak well done. He prefers burgers and meatloaf, Caesar salads and spaghetti, cherry vanilla ice cream. And he shuns tea, coffee and alcohol.

Breakfast is his least favorite meal of the day, and if he indulges, he prefers bacon and eggs, or cornflakes. Some of his favorites include fast food, red meat, and candy. In addition to that, he told Dr. Oz that he doesn’t get a lot of exercise either, wants to lose at least 15 pounds and is on medication to control his cholesterol. So how much does Trump weigh, anyway? He’s 6’3″ and weighs 267 pounds that give Trump a BMI 33.4. The Centers for Disease Control considers a BMI of 30 or above to be “obese.”

What do Donald Trump’s eating habits say about his capacity to lead?
They say you first need to be able to care for yourself before you can care for someone else. It seems this is not the case here. Junk food and fast food negatively affect brain synapses associated with learning and memory. A study revealed that skyrocketing insulin levels from fatty foods caused rats to develop memory-related problems similar to Alzheimer’s. So yes, the food a leader chooses to fuel themselves with actually matters.

Fast food can impact a person’s waistline, sure, but it can also have a great effect on the brain and a person’s decision-making process. Studies have shown that fast food can make people feel more impatient and prone to spending more money. Not great qualities for a person running a country.

His main form of exercise is talking a lot, apparently: “I never thought it, but speaking is almost a form of exercise.” Forget the gym. Donald Trump says he has a much better way to stay in shape on the campaign trail. He gets his exercise by waving his hands around while talking: “ When you’re making speeches for 25,000 people and shouting and screaming and having fun with everybody and making America great again, you get a lot of exercise.”
As for more traditional exercise, Trump golfs. He says while some people might not consider it to be exercise, “It keeps you away from the refrigerator because you’re out on the course. Trump does very little exercise and this contributes to his excess weight.

The 70-year-old real estate mogul says he thrives on just four hours of sleep a night. Trump is a classifiable sleep shamer. He credits his success to being awake most of the day: Trump sleeps for only three to four hours each night.
“How does somebody that’s sleeping 12 and 14 hours a day compete with someone that’s sleeping three or four?” he said.
Sleeping 4 hours a night is unhealthy. It means you are not getting in enough sleep cycles (4 is the minimum). Sleep is important for brain health and memory formation and retention. Sleep enables the brain to do housecleaning – getting rid of the free radicals and waste that accumulates inside and on the brain cells while you are awake. Lack of sleep could result in a build-up of amyloid plaque, which is associated with Alzheimer’s disease. 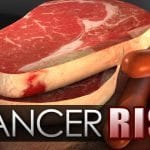 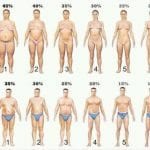