The chin-up (also known as a chin or chinup) is a strength training exercise. People frequently do this exercise with the intention of strengthening muscles such as the latissimus dorsi and biceps, which extend the shoulder and flex the elbow, respectively.

It is a form of pull-up in which the range of motion is established in relation to a person’s chin.

In the 70’s and 80’s the term chin-up not only included an overhand/pronated (“palms away”) grip,but some authors used it as the default meaning of the term,with an underhand/supinated (“palms toward”) grip called a “reverse” grip. Even in this era”chin-up” still includes palms-away lifting.The term “chin-up” is still regularly used refer to pulling using an overhand-grip.

HERE’S One exercise for a huge back (SEE IT NOW)

The chin up recruits all of the same muscles as the pull up, but the pecs and biceps are more activated in the chin up, and the traps are more active in the pull up. So why would you want to train chin ups as opposed to pull ups? Or vice versa? The answer depends entirely on your goals or sport, current strengths/weaknesses and personal satisfaction. 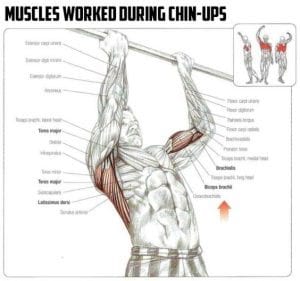 When To Do Chin Ups?

If you’re new to pull ups and want to build the strength to do overhand grip but can’t quite manage one yet, you might find that the underhand grip allows you to perform a full rep because of the extra activation of the biceps and pecs.

Pair them with a bicep isolation exercise in a pre- or post-exhaust set, or in supersets or tri-sets. Add them as a finisher when your back tires from pull ups.

Conclusion: Both pull-ups and chin-ups are two of the best exercises for back and overall upper body conditioning. However, they target the muscles a bit differently. Both exercises will work the latissimus dorsi and biceps, but standard chin-ups—with an underhand grip—place more emphasis on the biceps. When it comes to pull ups versus chin ups, no one exercise is really superior – both require strength and good technique to be done properly, and both activate the same muscles, just at different intensities. The overall decision about which grip to take depends on what will benefit you the most and what is most relevant to your training and goals.