You can also vary the position of your bench to target different portions of the chest using an incline or decline bench rather than just a flat bench. You can vary your grip to target different muscles with this exercise also, for example a close grip will place emphasis on the triceps. 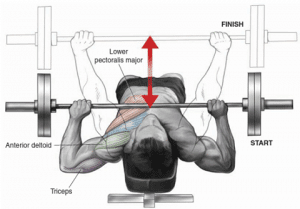 A pull-up is an upper-body compound pulling exercise. Although it can be performed with any grip, in recent years some have used the term to refer more specifically to a pull-up performed with a palms-forward position.

The term chin-up, traditionally referring to a pull-up with the chin brought over top of a bar, was used in the 1980s to refer to a palms-away (overhand/pronated) grip, with a palms-toward (underhand/supinated) grip being called a “reverse-grip” chin-up. In later decades, this usage has inverted, with some using “chin” to refer to a pull-up done with a palms-backward position. In spite of this, “chin” is still regularly used refer to overhand-grip.

The most popular current meaning refers to a closed-chain bodyweight movement where the body is suspended by the arms, gripping something, and pulls up. As this happens, the wrists remain in neutral (straight, neither flexed nor extended) position, the elbows flex and the shoulder adducts and/or extends to bring the elbows to or sometimes behind the torso. The knees may be bent by choice or if the bar is not high enough. Bending the knees may reduce pendulum-type swinging.

READ ALSO: A Muscle Building Plan For Every Man

A traditional pull-up relies on upper body strength with no swinging or “kipping” (using a forceful initial movement of the legs in order to gain momentum). The exercise mostly targets the latissimus dorsi muscle of the back along with other assisting muscles.

5. Least but not last, THE SPRINT.

Sprinting is one of the most explosive workouts you do and popular among celebrities. It can help you build your legs and abs, burn fat and more. How many times have we seen a track meet where there were sprinters competing and we were amazed on how sculpted their legs and abs were. Well this doesn’t happen by just waking up and stepping on a track. The reason behind this is the incredible training that is involved in becoming a proficient sprinter. 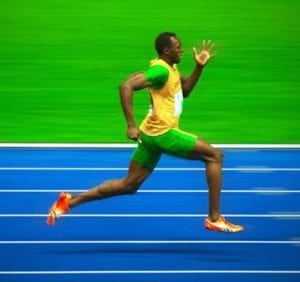 Sprinting is one of the most explosive and amazing workouts you could ever do. As a matter of fact, it is gaining a lot of popularity right now among celebrities who workout to stay in great shape. The specific body parts that sprinting targets are the butt, hips, hamstrings, quads, calves and abs. It is a complete body workout and can be done outside the gym in any local park or track.

CONCLUSION: When trying to burn fat these three exercises are definitely a god place to start- but don’t rush into things! Learn the movements, the grips and the correct form first! Safety should always be your top priority and although I always encourage heavy lifting, make sure you have your form down before you progress to a heavier load and make sure you pay attention to it throughout your whole lift!